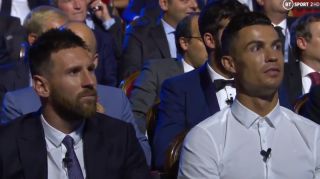 Watch below as the Frenchman seems to talk absolute garbage for just over a minute before simply ending his acceptance speech by saying he loves football.

There’s a great cut to Lionel Messi and Ronaldo in the clip, with the Juventus superstar looking at a complete loss as to what Cantona was talking about.

Later, members of the audience also look confused, with Cantona’s words truly sounding like he’s on the wind-up again…