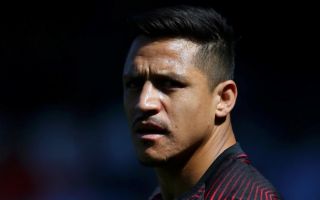 Manchester United forward Alexis Sanchez’s departure has been confirmed by the Red Devils on Twitter this evening.

See below for the official announcement from the Premier League giants, with Sanchez set to spend the season on loan at Inter Milan, who followed up with a confirmation of their own shortly afterwards.

It’s perhaps telling how short their tweet is, with no accompanying link to a story on their official site, though they do wish the Chile international the best of luck at his new club.

Sanchez joins former Man Utd team-mate Romelu Lukaku at the San Siro, though it’s fair to say the pair didn’t exactly show the best ability to link up when they were together at Old Trafford.

We can confirm that Alexis Sanchez joins Inter Milan on loan until 30 June 2020. We wish @Alexis_Sanchez the best of luck in Italy. pic.twitter.com/DdcRQRoEMk

That said, both are top players on their day and Inter manager Antonio Conte may fancy his chances of getting the best out of them.

Inter now look to have put together an exciting squad that could challenge Juventus for the title in the season to come.

Conte himself won Serie A when he was Juve boss, and could be the best-placed to topple the dominant Turin outfit this term.

If Sanchez can rediscover the form he showed during his Arsenal days, he’ll no doubt be a vital part of this Nerazzuri squad this season.