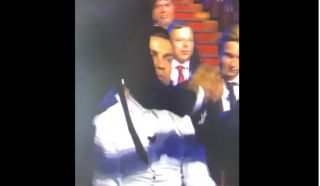 Cristiano Ronaldo looked a little awkward as he watched Lionel Messi pick up the Uefa Best Forward prize in Monaco this evening.

Watch the clip below, which was broadcast on BT Sport’s coverage of tonight’s ceremony on YouTube, as the Argentine returns to his seat with his prize.

The pair are known for their rivalry due to being two of the very best players of their generation for so many years now, with the rivalry reaching its peak when both were playing in La Liga.