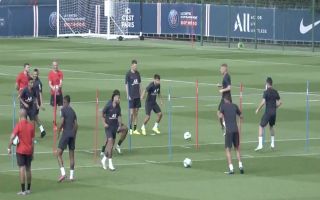 Paris Saint Germain attacker Neymar participated in training on Thursday afternoon, despite being strongly linked with a transfer to Barcelona.

According to Sky Sports in Italy via AFP, PSG have agreed to sell Neymar back to Barcelona ahead of the September 2 transfer deadline, two years after signing him for a world-record €222 million fee.

Speculation over the Brazilian’s future at Parc des Princes has been swirling throughout the summer and he has yet to play for Thomas Tuchel’s side at the start of the new season.

However, amid reports of an imminent return to Camp Nou, Neymar has been pictured taking part in a PSG training session ahead of tomorrow night’s Ligue 1 clash against Metz.

RMC Sport states that PSG have denied sanctioning Neymar’s departure and he is clearly still focused on his duties in the French capital for the time being.

Check out the 27-year-old laughing and joking with Thiago Silva while putting in a shift on the training field below, via Twitter.

In the meantime, Neymar is training with his PSG team-mates as normal. (?@nicopaillard) pic.twitter.com/RKMaGmUi08

Last Neymar ‘s training as a player of PSG!