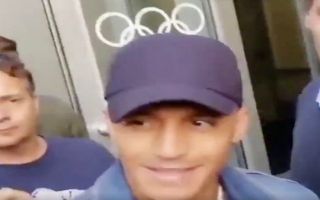 Alexis Sanchez certainly looks happy to be in Italy ahead of his season-long loan switch to Inter Milan from Manchester United.

BBC Sport reports that the Chilean winger is on the verge of joining the Italian giants until the end of the 2019-20 campaign, after a disastrous one-and-a-half year spell at Old Trafford.

The 30-year-old has only managed to score five goals in 45 appearances for the Red Devils since his January 2018 free transfer from Arsenal, spectacularly failing to live up to expectations in Manchester amid concerns over his fitness and attitude.

Sanchez was all smiles after arriving in Milan on Wednesday to complete a transfer to Inter, with the deal expected to go through before Monday’s European deadline.

Supporters cheered as the mercurial attacker emerged with his entourage on Italian soil, as he prepares to reunite with ex-United team-mate Romelu Lukaku, who joined Inter permanently at the start of August.

Check out Sanchez being welcomed to the club below, via Twitter.