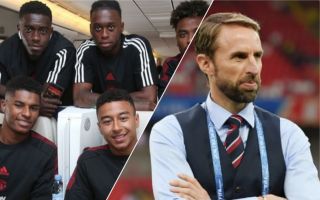 England announced their squad to take on Kosovo and Bulgaria for the Three Lions’ upcoming Euro 2020 qualifiers, with one star’s inclusion certainly causing some uproar for a few England fans.

Aston Villa defender Tyrone Mings has been rewarded for his fine form in recent times with a call-up, whilst usual starter Kyle Walker was surprisingly left out of the squad for next month’s matches.

There were a few surprising inclusions in Southgate’s side, however none more surprising than Jesse Lingard’s.

The Man United midfielder has been in shocking form for the Red Devils these past few months, with the 26-year-old failing to bag a goal or assist in the Premier League since December 2018.

However despite this, it seems like Southgate has still deemed the player’s performances worthy enough to deserve an England call-up, a decision that has angered a number of Three Lions fans…

Jesse Lingard and Mings you’re having a laugh

WHAT HAS LINGARD DONE TO DESERVE A SPOT?

How Lingard still gets in is beyond me.

Gareth has he got your nudes pal

Lingard & Wilson yet no Barnes, you're avin a giraffe?

Lingard does not deserve to be on there

Lingard has been terrible for quite a while now….how has Ashley Barnes not been given a go either, he’s on fire ?

How is Lingard in the squad?