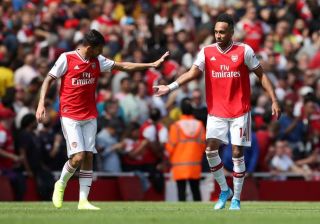 Arsenal manager Unai Emery has been advised to use loan signing Dani Ceballos closer to the front three for this weekend’s big game against Tottenham.

The Gunners take on Spurs on Sunday afternoon for the first North London Derby of the season, and it already looks a hugely important match for both sides.

Arsenal were beaten by Liverpool last week to halt their fine start, while Tottenham have not been convincing so far, winning only once in their first three Premier League matches.

Ahead of the game, Arsenal legend Charlie Nicholas is predicting a win for his old club, but told Sky Sports he still thinks Emery needs to change things up a bit.

The pundit is particularly keen to see Ceballos in a more advanced midfield role, with the Spaniard yet to land a clear position in this Arsenal team.

The 23-year-old can play in central midfield or as more of a number ten, and it seems Nicholas is eager to see Emery use him further forward than he has so far.

The Scot also believes Alexandre Lacazette needs to be involved alongside Nicolas Pepe and Pierre-Emerick Aubameyang in a potentially lethal front three.

He said: “I would always play Lacazette through the middle, Pepe on the right and Aubameyang on the left. Tottenham are nervous at the moment and mistakes always come from these matches. Ceballos needs to be closer to the front three too.”