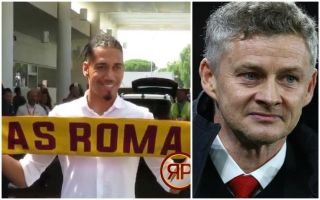 Manchester United defender Chris Smalling has arrived in Rome ahead of a season-long loan move to Italian giants Roma, the ace is out of favour at United.

29-year-old Manchester United centre-back has been pictured arriving in Rome ahead of a proposed loan move to Roma for the season.

Paulo Fonseca’s side needed to add a central defender before the close of the transfer window following the departure of Kostas Manolas this summer.

Italian journalist Gianluca Di Marzio has revealed that the Red Devils will receive a loan fee of €3m (£2.7m) for the England international.

Solskjaer confirmed that Smalling was on the verge of completing a move to the Serie A outfit in his pre-match press conference earlier.

Take a look at Smalling arriving in Rome below:

Given that Ole Gunnar Solskjaer has decided on Victor Lindelof and summer signing Harry Maguire as his starting centre-back’s – there’s not really any space for Smalling.

The Red Devils still have high earners Phil Jones, Marcos Rojo and Eric Bailly on their books. Cutting some players in this area is essential and Smalling will be the first out of the door.

The Maidstone United academy graduate will have the chance to experience the Italian life and this will be the first time he’s played for a non-English club in his career.

It will be interesting to see how the 29-year-old fares in Serie A, we also wonder if the England international will ever get the chance to play for United again once he returns from the loan move.

Or does this short-term move spell the permanent end of Smalling’s time at United?