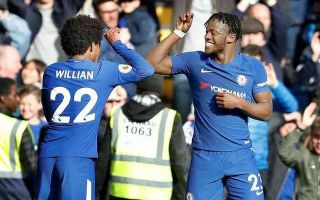 Chelsea have reportedly offered Michy Batshuayi to Napoli on loan and are even willing to pay a portion of the Belgian’s salary.

Batshuayi joined the Blues from Marseille for a transfer fee reported to be £33 million. The Belgian striker has struggled to establish himself as a regular at Stamford Bridge and spent last season on loan at Borussia Dortmund then Crystal Palace. So far, he has made 54 appearances for the Blues, scoring 21 goals and providing 5 assists.

SEE MORE: “Once a blue always a blue” – Some Chelsea fans laud France boss Deschamps after he leaves key Blues star out of French squad

This season, the 25-year-old made the bench for the UEFA Super Cup against Liverpool but apart from that, he hasn’t even made the squad for any of their matches. According to reporter Dario Sanataro, Chelsea are willing to sell Batshuayi to Napoli.

Given that Chelsea already have Olivier Giroud and Tammy Abraham, it seems very unlikely that Batshuayi will have much game time this season. However, a move to Napoli may not guarantee him much first-team opportunities either as the Gli Azzurri already have the likes of Dries Mertens and Arkadiusz Milik who play in the centre-forward position.