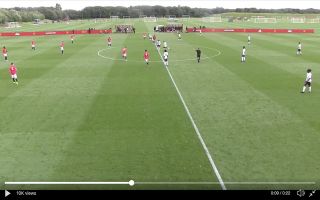 Charlton ace Aaron Henry has been thrusted into the spotlight after his stunning goal from the halfway line against Manchester United’s Under-18s side.

Aaron Henry has won all the plaudits after Charlton Under-18s defeated Manchester United’s 18s side in a friendly last week, the Addicks stunned the Red Devils in a 4-2 victory.

Henry has hit the headlines after his stunning effort in the clash. The 16-year-old midfielder scored directly from kick-off with a sensational effort from the halfway line.

The strike managed to catch United’s goalkeeper off guard and flew into the back of the net.

Henry certainly has a footballing brain after he quickly pounced on the fact that the stopper was slightly off his line, the ace was mobbed by his teammates after his spectacular effort

According to the Daily Mail, Henry has tried this before, with the report claiming that the ace attempted to do the same thing twice against Hull two weeks ago.

Henry has been one of the star performers in Charlton’s youth side – who have managed to win their first three games of the season.

Check out the stunning effort below:

Henry could be a star for the future, the ace is already capped at Under-16s level for England and with exciting moments like this, we’ll be hoping to see the starlet in action at the top level in the future.

Could Charlton give Henry the chance to shine in the Championship this season?