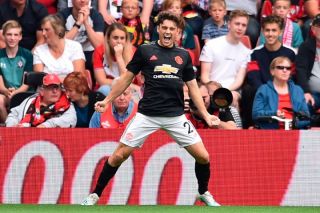 It’s been some start to life at Man Utd for Daniel James, and it continued as the Red Devils faced Southampton on Saturday.

As noted by BBC Sport, the 21-year-old signed for around £15m from Swansea City this past summer, with the expectation being for such a young player that it might take a while for him to settle at United.

However, he has wasted little time in showcasing his quality as he bagged his third Premier League goal for Man Utd in their clash with the Saints this weekend.

As seen in the tweets below, that now means he has scored the same number of league goals in just four appearances as Alexis Sanchez has managed for United after his move from Arsenal in January 2018, 28 less games than the 30-year-old.

That’s both a damning verdict of the Chilean international’s struggles at Old Trafford as well as being a positive sign for the club that James can fill that void and offer a consistent source of goals from out wide.

Particularly now that Sanchez has secured an exit on a season-long loan deal to Inter, it will be down to James and others to continue to lead the way for Man Utd and fire in the goals to take them closer to their objectives this year.

For now though, it’s certainly an impressive start from the talented youngster, and it will surely do wonders for his confidence and belief moving forward that he has been able to make an impact immediately.

Daniel James has now scored as many league goals for Manchester United as Alexis Sanchez.

To the manor born. pic.twitter.com/ArzcHWxHnF

Daniel James has now scored as many Premier League goals for Manchester United as Alexis Sanchez.