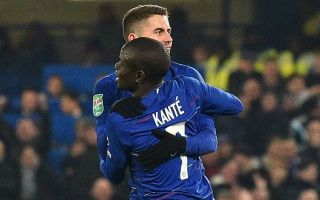 Chelsea manager Frank Lampard heaped praise on Jorginho and feels that the midfielder has qualities that can change a game.

Jorginho has become a regular for the Blues ever since joining them from Napoli on a transfer fee reported to be around £57 million by BBC. The Italian international has so far made 58 appearances for Chelsea, scoring three goals. This season, he has featured in all of the Blues matches, scoring in the UEFA Super Cup against Liverpool.

The 28-year-old has done very well so far with Chelsea fans singing his name after the match against Norwich City. Speaking about those chants, Lampard told Chelsea’s official website: “I was delighted to hear that myself because he has been a pleasure to work with. Fans are generally pretty honest and I don’t want to talk about last year but what they are seeing is a player now who has a drive, a determination and is a good team player.

“I am certainly seeing that and I think they are. He also has quality that can change a game, lead a game and own a game slightly from midfield areas, and I am delighted with that.

“He is a fantastic sportsman who cares deeply and when you have a training session that might fall below standards, or drop for a moment, he is one that drives it up. That is what I see and so when the fans see that on the pitch as they did at Norwich then that is why they sing his name.

From watching Chelsea closely last year, I thought he finished the season brilliantly and if there was a tough time between him and the fans, what is really easy is to hide. That he never did, he never hid from receiving the ball and that is a sign of his character. And that is what fans will applaud and long may it continue.”

Given that Jorginho was heavily criticised by Chelsea fans last season, it’s good to see that they are appreciating him this season. The Italian international has been terrific from the middle of the park for the Blues and his passing has been magnificent so far.

Jorginho will hope to put in another strong performance for Chelsea today when they take on Sheffield United at Stamford Bridge.