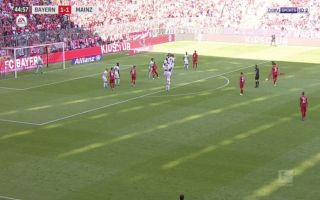 David Alaba scored a brilliant free kick for Bayern Munich this afternoon as he handed Niko Kovac’s side the lead vs Mainz in the Bundesliga.

Having originally fell behind in the match, Bayern equalised through Benjamin Pavard, with the home side then taking the lead just before half time through a stunner from Alaba.

After being awarded a free kick just outside the area, Alaba stepped up and slammed the ball into the top corner, giving Mainz’s ‘keeper no chance in the process.

What a strike from the Austrian!

Pictures from the Bundesliga.