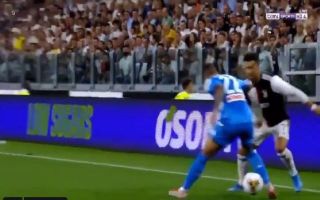 When Ronaldo first broke through at Man United he was notorious for wanting to try as many step-overs as possible before attempting to do anything productive.

He almost went too far the other way as he turned himself into a ruthless and relentless goalscoring machine who would shoot whenever he got the chance.

READ MORE: Video: No chance of VAR taking this one from Cristiano Ronaldo as he opens his account for the season

He showed he still has that ability to deceive his opponent with a brilliant nutmeg in tonight’s game against Napoli:

It might ultimately be his opponents who have the last laugh as Napoli came from 3-0 down to level the game up as the game enters it’s latter stages.