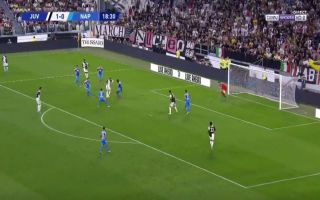 There seemed to be a certain inevitability that Gonzalo Higuain just wouldn’t work out at Chelsea. It wasn’t even clear where he would be playing this season as Juventus have an abundance of options going forward but he’s shown his class tonight with a great turn and finish.

Despite tight marking from Kalidou Koulibaly he completely leaves him for dead with a brilliant bit of skill and the finish is outstanding.

He always seems to score against his former club and tonight is no exception. Former Man City full back Danilo opened the scoring and this goal from the Argentine put Juve 2-0 up minutes later.