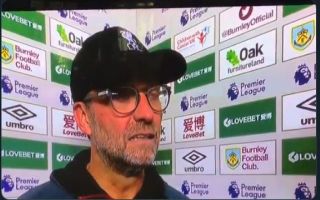 There’s no doubting that Jurgen Klopp will go down as one of the most liked and charismatic managers in recent years, partly because his face gives away almost everything that he feels.

Liverpool eased to a 3-0 victory away to Burnley this evening and clearly Klopp thought that Trent Alexander-Arnold had been credited with the opening goal.

His facial expression here is hilarious as he learns that it was awarded as an own goal to Chris Wood:

Klopp’s face when they tell him Trent’s goal is in fact an own goal. pic.twitter.com/2Y4pwVNOjk