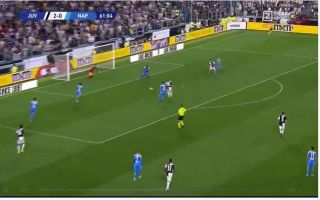 VAR has already made plenty of enemies since it’s introduction and Cristiano Ronaldo was obviously frustrated last week as his goal was disallowed due to a marginal offside decision.

There was no such danger with anything disallowing his goal tonight as he put Juventus 3-0 up against Napoli.

It’s not the cleanest you’ll ever see him strike a ball but the precision on his effort is enough to send it past the sprawling keeper:

Napoli have since pulled two quick goals back to ensure a tense finish for last season’s champions.