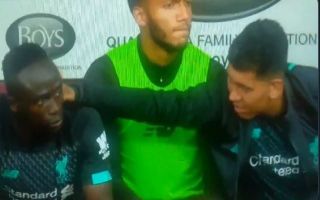 It’s generally accepted that most players at the top level will be very talented, but what sets the elite players apart is their ability to be outstanding on and off the pitch.

Sadio Mane had a bit of a tantrum in Liverpool’s victory over Burnley this afternoon but Roberto Firmino was caught on camera trying to comfort his teammate and trying to smooth things over:

Firmino such an important player for Liverpool, on and off the pitch pic.twitter.com/B7dS5WEGyY

Admittedly it’s one of the more aggressive acts of comforting you will see but the intent to help his teammate will go a long way.

There doesn’t seem to be any long term reason for Liverpool fans to be worried as ESPN reported that Jurgen Klopp downplayed the the impact of the falling out.

It looks like a spat that will be forgotten about by the time they take to the field together again.