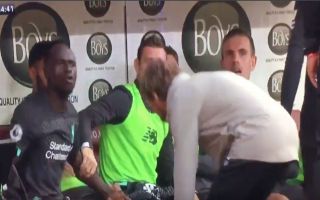 Sadio Mane wasn’t exactly best pleased with teammate Mo Salah this evening, with the Liverpool forward clearly showing his frustration after being taken off against Burnley.

With the score already at 3-0, Salah was played in by his Reds teammate, as he ignored a simple pass to Mane, trying to take on the Burnley defence and score himself in the process.

Mane has every right to be mad Salah is just being a selfish prick here. pic.twitter.com/wWyy9UkgmO

Passing it to Mane would’ve given the forward a great chance to score his second of the match, however Salah seemingly only had eyes for goal.

After being taken off, Mane was seen fuming on the Reds bench, with the Senegalese international seemingly directing his anger towards Salah.