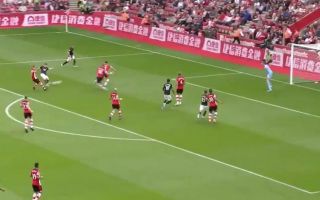 Man Utd didn’t have to wait long to break the deadlock at Southampton on Saturday and Daniel James did it in some style for the visitors.

It took just 10 minutes for the Red Devils to find a breakthrough as they threatened early on while Southampton also had an early effort on goal in a bright start from both sides.

However, it was the extra bit of quality from James that made the difference, and as seen in the video below, it was a wonderful finish from the youngster as he curled his effort into the far side of the net with brilliant accuracy and pace.

Question marks could perhaps be raised over the defending from the Saints, but take nothing away from the finish as James continues to impress after his summer switch to Man Utd.

The visitors were certainly on the front foot after the opening goal, with Ole Gunnar Solskjaer hoping for a positive result after the disappointment of their defeat to Crystal Palace last time out.

Daniel James is on fire ?

The Welsh winger cuts in and finds the top corner with a beautiful strike!

WHAT A GOAL DANIEL JAMES!! ??? pic.twitter.com/u7uyq69rKz