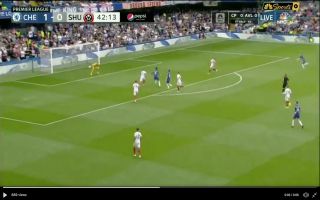 Chelsea star Tammy Abraham pounced on an error from Sheffield United’s defenders to fire Chelsea into a 2-0 lead before the end of the first-half.

In the 42nd minute of the clash Sheffield United’s defenders had a moment to forget after they both jumped up to head the ball away, the miscommunication led to the ball dropping to Abraham’s feet.

The 21-year-old shrugged off the defender and maintained enough balance to fire the ball into the back of the net.

Abraham also opened the scoring for Frank Lampard’s side with a smart finish in the 19th minute of the clash.

Check out Abraham’s second of the afternoon below, courtesy of NBC Sports:

Abraham has been on fire for the Blues after his unfortunate miss against Liverpool in the UEFA Super Cup. This is the forward’s 4th goal in just two Premier League games.

The former Aston Villa loanee is on fire for the Blues.