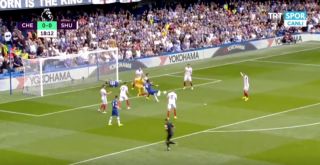 Tammy Abraham kept up his good start to the Premier League season this afternoon, as the Chelsea ace bagged a close-range volley against Sheffield United.

Having scored a brace against newly-promoted Norwich City last week, the Englishman took his tally in the league this season to three following a strike vs United.

Tammy Abraham with the opener once again??? pic.twitter.com/vWqbWStU5o

Tammy Abraham! He’s a predator in the box! #CHESHU pic.twitter.com/7iRORBxSIE

After heading the ball down the Pulisic, it eventually fell back to Abraham, who fired home convincingly form seven yards out to hand the home side the lead.