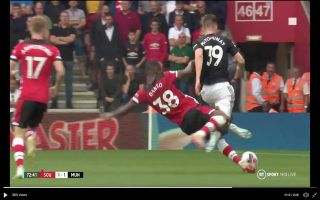 Some fans have reacted angrily to Kevin Danso’s reckless challenge on Manchester United’s Scott McTominay which led to the Southampton ace being sent off.

Defender Kevin Danso was shown a second yellow card and sent off for Southampton in the 73rd minute of this afternoon’s 1-1 draw with Manchester United.

The English-Austrian went from hero to zero in a matter of minutes, Danso’s challenge on Scott McTominay came less than five minutes after he produced a crucial assist for the Saints.

McTominay charged forward for the Red Devils and Danso wasn’t prepared to let the Scotsman get into the final third, the Austria international dived in recklessly to bring down the midfielder.

This was a no-brainer and Danso was shown a second yellow card and sent off.

Take a look at the challenge below:

And in comes agent Kevin Danso to get sent off for his beloved. #SOUMUN #KevinDanso pic.twitter.com/eUn6UJ0jQx

Here’s how some fans have reacted to the challenge:

Danso there’s no need for that. Shocking

Disgusting tackle from Danso! Clearly deserved to be sent off.

Should have been a straight red. Horrendous challenge. People have been sent off for much less

20-year-old Danso is currently on loan at Southampton from Bundesliga side Augsburg.