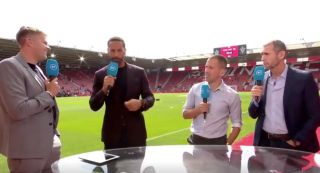 Rio Ferdinand claimed that Messi or Ronaldo should’ve won the UEFA Men’s Player of the Year award ahead of Virgil Van Dijk ahead of Man United’s clash against Southampton today.

Van Dijk was handed the award on Thursday during the Champions League draw, a fair result given the brilliant campaign the Dutchman had last term.

"I'm happy for Van Dijk but when someone scores 50, you can't do that!"@rioferdy5 breaks from the centre-back union and believes Van Dijk still falls short of Messi and Ronaldo.#EarlyKickOff pic.twitter.com/vNcEnzqitv

However, it seems like Ferdinand doesn’t agree that the Liverpool man should’ve been awarded the accolade, with the ex-Man United man pointing to Messi’s goals and Ronaldo’s trophy haul as reasons why they should’ve won it over Van Dijk on BT Sport earlier today.

Do you agree with Ferdinand on this one? Let us know down below.