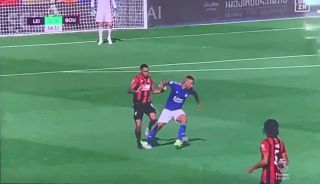 Youri Tielemans somehow escaped a red card for Leicester this afternoon, after he committed a horror tackle on Bournemouth forward Callum Wilson.

With the game sat at 2-1, Leicester could very well have had a man sent off in the second half, after Belgian midfielder Tielemans produced a horrible challenge on Wilson which somehow escaped a red card.

This clearly shows that VAR simply does not work. Look at this Tielemans challenge in the Leicester vs Bournemouth game.

A horrible tackle. He did not even get a yellow card for that! ????pic.twitter.com/m4MzEE63Gg

If you want a reason why VAR doesn’t work…. then go look at this Tielemans challenge in the Leicester vs Bournemouth game. A shocking tackle gone unpunished. HOW IS THAT NOT A RED CARD. Result – not even a yellow ???????????? pic.twitter.com/EDpteWEhsI

It was a horrible attempt at getting the ball from Tielemans, who somehow managed to avoid getting shown a straight red card despite VAR being used.

Pictures via the Premier League