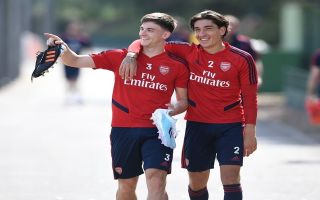 An Arsenal fan has revealed the date that this Gunners star will return from injury after a chance conversation with the ace outside the Emirates Stadium this afternoon.

One Arsenal fan has taken to social media to reveal that summer signing Kieran Tierney is just two weeks away from returning from injury.

The Gooners bumped into the star outside the Emirates Stadium this afternoon and quizzed the Scotsman on his fitness.

According to Football London, the left-back has been sidelined following a double hernia operation.

The 22-year-old completed a move to north London on deadline day, the Gunners signed the ace from Celtic for a Scottish transfer record of £25m, as per BBC Sport.

Tierney gave an update on his injury to a fan outside the Emirates Stadium ahead of today’s clash:

Kieran Tierney has told an Arsenal fan outside the Emirates Stadium that he’s two weeks away from returning from injury. [SilverGoon on Reddit via @afcSource] #afc pic.twitter.com/1GAnQLnVHt

Kieran Tierney with a Arsenal fan outside the ground. Says he’s two weeks away from being ready.

Given the investment that the Gunners have put into Tierney, it’s likely that he will become Arsenal’s first-choice at left-back once he returns from injury – ahead of Sead Kolasinac.

Tierney has been sensational for boyhood club Celtic in recent years, but after dominating Scotland now seems like a great time for the to prove himself at a higher level.

Unai Emery will be hoping that the Scotland international can have a similar impact to countryman Andy Robertson – who has been revelation since joining Liverpool.

Tierney is a energetic full-back that should compliment Arsenal’s style of play, the ace will be expected to charge down the left-flank and drill in crosses for forwards Pierre-Emerick Aubameyang, Alexandre Lacazette and Nicolas Pepe.