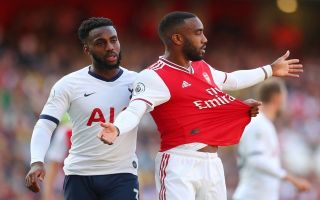 Some Arsenal fans are angered with this star’s first-half performance against Tottenham, the Gunners are heading into the halftime break down 2-1.

Unai Emery’s side looked promising in the early stages of the match but some awful defending gifted superstar Christian Eriksen with the chance to fire Spurs into the lead in the 10th minute.

Some Arsenal fans took to social media to blame centre-back Sokratis for the goal.

The Gunners found themselves two goals down with five minutes to go in the first-half after Harry Kane blasted the ball into the back of the net from the spot.

Midfielder Granit Xhaka looked seriously out of his depth as he brought down Heung-Min Son in the box with a reckless challenge.

Fortunately Arsenal will come into the second-half just a goal down after Alexandre Lacazette showcased some superb ability to get a goal back for the Gunners in first-half stoppage time.

Take a look at some reaction to Arsenal’s performance, Xhaka seemed to be the main target of fan criticism:

Sokratis and Xhaka are fucking disgraceful

I usually defend Xhaka but he’s been dogshit. Need some creativity in midfield.

Get Xhaka out and bring Ceballos in. We are winning this for sure.

Xhaka has to go in January. There’s no reason not to sell him. Offers little and is more of a hinderance than useful in big games.

Lock xhaka in the toilets and bring on Ozil

Arsenal look fine going forward, but as usual the side’s poor defensive ability has let fans down so far. Emery needs to tighten things up at the back and look to get the Gunners back on level terms in the second-half.

Either Lacazette, Pierre-Emerick Aubameyang and Nicolas Pepe will shine in the second-half or the likes of Xhaka and Sokratis will be at fault for a derby day loss.