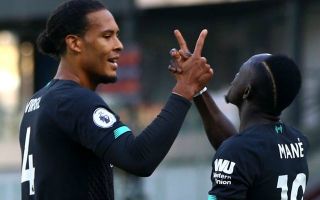 Liverpool centre-back Virgil van dijk said that he was delighted with his team’s performance against Burnley yesterday.

Jurgen Klopp’s men registered their 13th consecutive Premier League win by beating the Clarets 3-0. The Reds opened the scoring after 33 minutes when Trent Alexander-Arnold cross was deflected to the back of the net by Chris Wood. Just 4 minutes later, Roberto Firmino fed a pass to Sadio Mane who shot past Nick Pope to make it 2-0.

SEE MORE: “Don’t want his style near Liverpool”: These fans react to the prospect of Steven Gerrard replacing Klopp

In the second half, Firmino scored his 50th Premier League goal to put the Reds 3-0 up. All in all, it was a fine performance from Liverpool yesterday and van Dijk was very pleased with the way his team played.

Speaking to Liverpool’s official website, the Dutchman said: “Beforehand this was a tough fixture and I think everyone who comes here knows that. They have a clear plan, very direct, second balls, a hard fight, and I think we dealt with it pretty well. I’m very delighted to take the three points with us and keep the clean sheet. They kept doing what they always do, 2-0 is a little bit dangerous because if they score one they are going to go for it and believe it, so I think they held on to that [belief] in the second half and obviously after we scored to make it 3-0 it was game over.”

The Reds are now at the top of the table, two points ahead of their biggest competitors Manchester City. With the international break coming, several Liverpool players will join their respective national teams. These include Jordan Henderson, Trent Alexander-Arnold, Alex Oxlade-Chamberlain, Andy Robertson, van Dijk, Firmino, Gini Wijnaldum, Dejan Lovren and Fabinho.

The Reds resume their league campaign on the 14th against Newcastle United at Anfield. Three days later, Klopp’s lads begin their Champions League title defence against Napoli at the Stadio san Paolo.