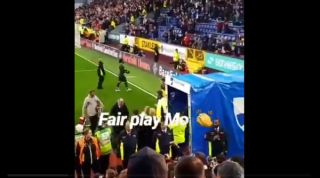 Liverpool star Mohamed Salah was praised by this fan below for giving his shirt to a Burnley supporter after the Reds’ 3-0 win at Turf Moor yesterday.

The Egypt international is one of the best players in the Premier League at the moment and will have made this fan’s day by giving away this priceless gift.

Fair play to @MoSalah for this! giving his shirt away to an opposite teams fans ? ? prob made that kids day ! Apart from the result obviously ? #BURLIV #Salah #PremierLeague #football #BurnleyFC #LiverpoolFC @LFC @BurnleyOfficial pic.twitter.com/whkB9B2Up8

While Burnley fans will no doubt have been disappointed to see their team lose 3-0, it is no disgrace to lose to this quality Liverpool side.

Salah also always comes across as a down-to-earth and likeable character, and he’s shown that here with this classy gesture.