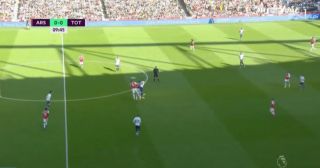 Arsenal fans took to Twitter to blame defender Sokratis for his role in Christian Eriksen’s goal against the Gunners, one that saw Spurs take an early lead at the Emirates.

With the game just 13 minutes old, Pochettino’s side found themselves 1-0 up after Leno could only palm Lamela’s shot into the path of Eriksen, who slotted into an empty net from eight yards.

A nightmare for the @Arsenal keeper allows Eriksen to tap in after a slick @SpursOfficial counter-attack ?

In the build-up to the goal, Sokratis was caught going up for a header with one of his Arsenal teammates, with neither winning the ball over the Spurs’ Kane, something that contributed significantly to the goal itself.

And given their reaction to the goal on Twitter, it seems like Arsenal fans took no time at all to notice this, as they took to social media to blame the Greek defender for his part in Eriksen’s strike.

Sokratis with the worst bit of defending I’ve ever seen. All his fault.

Sokratis fault, man sees Xhaka about to head the ball and he commits himself.

Sokratis at fault for that goal. #ARSTOT #COYG

Completely Sokratis' fault. Why did he go for the header completely out of position #ARSTOT

Lol, blame everything on Luiz
That was clearly sokratis fault

Why are you going to contest for the ball when Xhaka is already in the air?

How? We all all over them. It was all sokratis fault