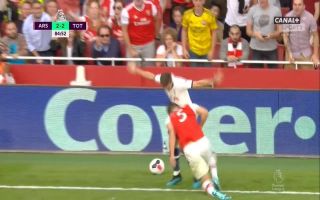 Arsenal defender Sokratis was involved in a heated scrap with Tottenham star Harry Winks during the late stages of this afternoon’s north London derby.

Arsenal centre-back Sokratis went into a fit of rage after appearing to be aggressively pulled by England international Harry Winks during today’s north London derby that ended as a 2-2 draw.

Winks was pulling at Sokratis after the pair battled and the ball went out for a throw in, Sokratis didn’t take too kindly to being pulled (who would) and the former Borussia Dortmund star wasn’t letting go of Winks.

The little scrap then evolved into a full on melee between players from both teams and the referee had to wrestle back control of the game.

Surprisingly, Sokratis was shown a yellow card but Winks escaped a second booking – something that Arsenal fans really aren’t happy with.

Check out the altercation below:

How does Sokratis get booked here, but Winks doesn't. Guarantee that's a yellow for winks if he's not already on one. Ref has bottled it massively pic.twitter.com/M0ua8VEzhL

Here’s some reaction to the little scrap:

Sokratis would munch you @HarryWinks stand down brother ?

Hows has Winks avoided a red card? The grabs Sokratisby the shirt and throws him to the ground!

Is there different VAR rules for Spurs??

Weird decision from Atkinson. Winks gets nothing and Sokratis gets a yellow card. In cases like this both normally get a card but Winks was already on a yellow so he decides to give him nothing.

How’s Winks not been booked there but Sokratis has? #ARSTOT

Sokratis would literally choke slam winks. Who gassed him

Unbelievable that Sokratis gets booked and Winks doesn't

How is that a yellow card for Sokratis but not one for Winks?!

It’s great to see someone with the passion of Winks, but the England international needs to be careful in the future – he’d have absolutely no chance against someone like Sokratis in a fight.