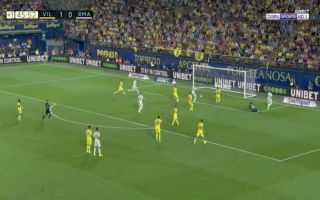 Gareth Bale scored his first Real Madrid goal in months this evening, as the Welsh international draw Los Blancos level in their clash against Villarreal.

Having gone 1-0 down early in the first half thanks to a goal from Gerard Moreno, Real found themselves level just before the break, as Bale scored his first goal of the season, and his first in all competitions since March 16th.

A fine team move from Zidane’s men saw the ball end up with Dani Carvajal, who played the ball across the six yards box to Bale, who slotted into an empty net to draw the two sides level with what was the last kick of the first half.

How’s that for perfect timing!