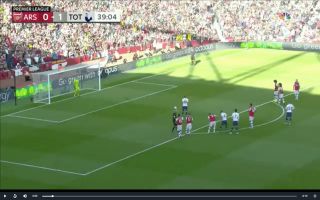 Tottenham have extended their lead against Arsenal this afternoon. Spurs were handed a penalty after Granit Xhaka’s reckless challenge on Heung-Min Son.

In the 40th minute of this afternoon’s north London derby, Tottenham were awarded a penalty after Granit Xhaka brought down Spurs attacker Heung-Min Son with a clumsy slide tackle.

England captain Harry Kane stepped up to take the penalty and the superstar forward didn’t put a foot wrong as he sent Bernd Leno the wrong way with a lovely spot-kick.

Check out Kane’s penalty below, courtesy of NBC Sports:

Here’s another look at Xhaka’s foul:

Arsenal were promising in the opening stages of the match before gifting Christian Eriksen with a goal, the Gunners’ backline has once again been the root of their downfall.