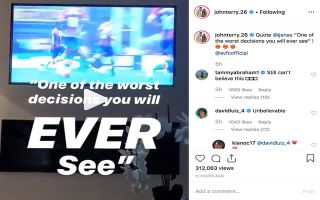 Chelsea legend and current Aston Villa assistant manager John Terry has taken to Instagram to react to the controversial goal that was disallowed for his side vs Palace.

John Terry has uploaded a video on Instagram as his reaction to Kevin Friend’s decision to disallow Aston Villa’s late equaliser against Crystal Palace yesterday afternoon.

After Henri Lansbury put the ball into the back of the net, it was realised that Friend had blown his whistle before the strike to rule that Villa star Jack Grealish had dived in the buildup to the goal.

The youngster appeared to be shoved by Eagles sensation Wilfried Zaha before falling down after contact with Terry’s ex-teammate Gary Cahill.

Grealish didn’t appeal for a foul when he hit the deck and instead slotted the ball into Lansbury’s path, this is what has left many fans confused.

Terry’s view on the incident have been echoed by former teammates Chelsea forward Tammy Abraham and Arsenal defender David Luiz. The pair both replied to Terry’s social media post.

Take a look at Terry’s reaction below:

Quote @jjenas “One of the worst decisions you will ever see” ! 😡😡😡 @avfcofficial

It’s understandable that a referee makes an incorrect decision from time to time, but fans will be scratching their heads to wonder why VAR didn’t overrule the call.

Opinions on VAR are moving towards an all-time low, the system’s introduction this season has sparked controversy during every weekend of Premier League football so far.

For some reason VAR operators aren’t overruling calls that seem to be blatantly incorrect by fans, pundits and ex-pros.

Unfortunately it seems as though Friend wasn’t impartial in his treatment of Grealish, perhaps the constant diving claims that Grealish has received in his career swayed the referee’s decision.