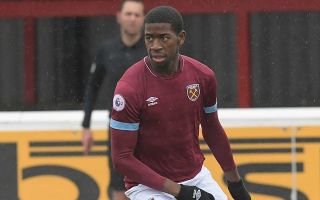 18-year-old Alese has been a part of West Ham’s youth team since 2017 but is yet to make a first-team appearance. Last season, he made 24 appearances for the Hammers’ U18 team, scoring a goal and providing an assist. He didn’t feature during the Hammers’ pre-season and is currently with the reserve team.

According to Sky Sports, Alese is close to signing for Accrington Stanley on loan till January. The report also states that the Hammers will have the option of reviewing his deal in January.

Stanley are currently 20th in League One, having won a game out of the 5 matches they have played so far. Having someone like Alese who has impressed at the youth level for a top-flight club can help the club finish in a decent position in the league.

The move can also be beneficial for the 18-year-old as this can give him first-team football and maybe, some game time at West Ham in the upcoming seasons.