Liverpool are interested in making a move for this promising Championship striker, the ace has 15 goals in just 21 games for England’s youth teams.

Goal report that the 17-year-old has been called up to the England Under-18s side for the first time, there’s no doubt that the forward’s stock is quickly rising.

It’s not surprising to see that rivals Liverpool and Everton are keen on a move for the ace, Gelhardt hails from Merseyside town Netherton.

It’s also claimed that the striker impressed Liverpool with his performance in Wigan’s FA Youth Cup defeat to the Reds back in February.

Gelhardt is becoming an important member of Wigan’s first-team, the ace came off the bench in the Latics’ last Championship clash against Barnsley. 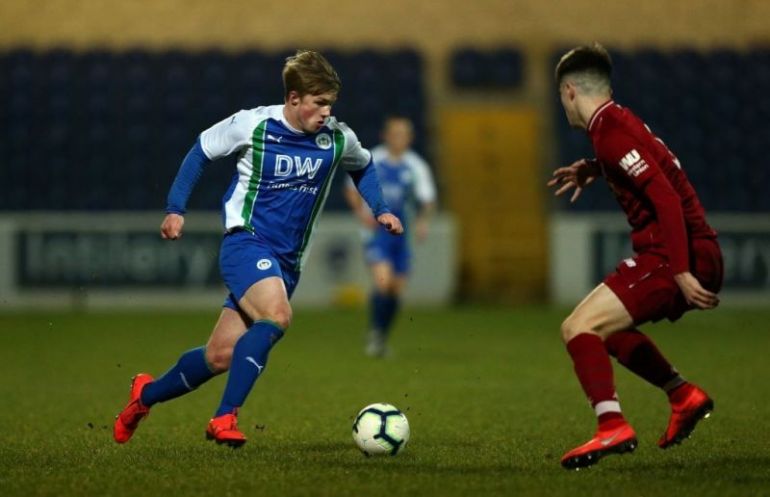 Gelhardt in action against one of Liverpool’s youth teams.

Goal’s report also claims that a move for Gelhardt could be more likely given that Bobby Duncan recently left Liverpool for Fiorentina.

Steven Gerrard’s cousin sealed a switch to the Serie A side in a deal worth €2m (£1.8m), as per BBC Sport.

Gelhardt showed his talents during pre-season with a goal against top-flight side Burnley.

Seventeen-year-old Joe Gelhardt drills one for the Latics. #wiganathletic pic.twitter.com/avTh8IqNTa

Reds fans should keep a close eye on England Under-18s’ clashes during this international break, Gelhardt could lineup alongside Liverpool starlet Curtis Jones.

Could the pair be more than international teammates in the near future?

Gelhardt has a prolific record for England’s youth sides, the 17-year-old has scored 15 goals in 21 appearances for the Young Lions’ Under-16s and 17s sides.