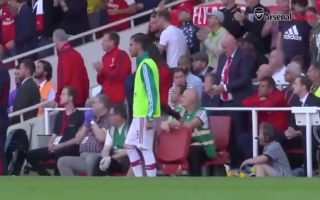 Dani Ceballos has already made an impressive start to life at Arsenal, and after seeing this clip, Gunners fans are going to love the Spaniard even more.

Ceballos moved to north London on loan from Real Madrid this summer, with the midfielder putting in a brilliant display against Burnley on his debut.

And despite not being given a start vs Spurs, Arsenal fans are going to love the player even more than they already do after seeing how he celebrated Lacazette’s goal.

After the Frenchman made the scoreline 2-1, Ceballos leapt out of his seat on the sub’s bench in celebration, something that shows just how devoted he is to the club despite only being there on loan.