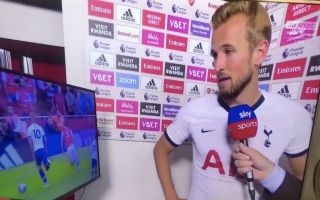 Tottenham’s Harry Kane has denied trying to deceive the referee in the latter stages of Sunday’s north London derby at Emirates Stadium.

Spurs secured a 2-2 draw against Arsenal away from home at the weekend, but missed a golden opportunity to get one over on their arch-rivals.

The Lilywhites took the lead early on through Christian Eriksen before Harry Kane notched his third goal of the season from the penalty spot, but an Alexandre Lacazette strike right on half-time swung the momentum of the match in Arsenal’s favour.

Pierre-Emerick Aubameyang fired an equaliser in the 71st minute and neither side could find an all-important winner, but Tottenham felt they should have been awarded another penalty late on.

Kane went to ground in the box after clashing with Sokratis, but replays suggested that the England striker went down a little bit too easily after hauling himself into the Greek the defender.

Speaking to Sky Sports after the match, Kane addressed accusations of diving, insisting he was the victim of a “tired tackle”.

Check out a short clip of Kane explaining his action below, via Twitter.

Hahahahaha they actually made Harry Kane analysing his dive ???pic.twitter.com/5SJwtFEd9U

Got a lot of time for Geoff Shreeves making Harry Kane watch his dive back and commentate on it ? pic.twitter.com/Yf9m3TJQP5