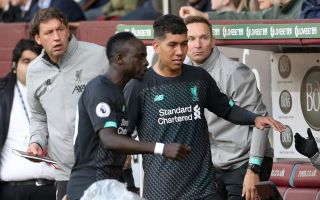 Liverpool boss Jurgen Klopp was all praise for Roberto Firmino after the Brazilian netted his 50th Premier League goal against Burnley last weekend.

The 27-year-old forward became the first from his nation to score 50 goals in the Premier League era. He had a terrific outing against Burnley as he assisted Sadio Mane’s goal in the first half before netting his second of the season.

Klopp heaped praise on Firmino and said that he’s valuable to the team. Speaking to Liverpool’s official website, the Reds manager said: “Hopefully it stays like this, [him] hardly missing a game! He missed a few and that was not too cool, but Bobby – what can I say about him that not everybody knows already? He’s an incredibly important player. He enjoys it so much to play in this team, to be really there with all these super guys around him.

“That’s what helps him then, of course: if you have the speed around you, you can be this little cheeky guy in between the lines, being there and scoring the goals. Yeah, he’s a very valuable player for us.”

Firmino has netted 68 goals and has provided 50 assists in 199 appearances across all competitions since joining Liverpool from Hoffenheim in 2015. This season, the Brazilian international has started strongly, scoring twice and assisting thrice in six appearances.

Given his scoring rate and how often he’s finding space for his teammates up front, there’s every possibility of Firmino enjoying his best season in 2019/20. Liverpool will certainly hope that he stays fit for the entirety of the season as he’ll be needed badly in the Reds’ quest to win the Premier League.

The 27-year-old will now join his national team for their friendlies against Colombia and Peru. Following the international break, Liverpool face Newcastle United at Anfield before playing their Champions League opener against Napoli at Naples. The latter could be Firmino’s 200th match for the Reds.