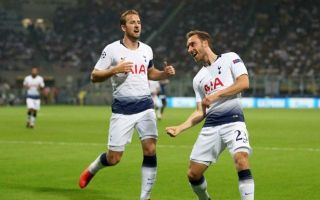 Inter Milan are reportedly planning to make a move for Tottenham talisman Christian Eriksen, who is in the final year of his Spurs contract.

The Danish international has been linked to a move away from Spurs this summer with Real Madrid and Manchester United being interested in him according to reports. Don Balon claimed that a fee of €84 million was agreed by Los Blancos to sign Eriksen. However, no deal was materialised and with the transfer window closed, the 27-year-old won’t go to the Bernabeu at least.

Eriksen has featured in all of Tottenham’s matches this season, scoring the opening goal in last weekend’s North London Derby. The Danish international’s current contract expires next year and is yet to sign a new one with the Daily Mail reporting last month that he rejected a new deal from Spurs which would see him earn £200,000-a-week.

Eriksen would be a fine addition to Antonio Conte’s squad and he can certainly boost the team’s chances of winning the Serie A. With the Nerazzurri joining the race to sign the attacking midfielder, it won’t be easy for Manchester United to sign him now.