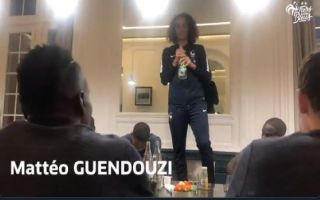 We live in a time where a worrying amount of footballers have started to use their fame as an excuse to release music singles. Jackson Martinez and Jurgen Locadia among others have released singles in recent years, but we can be fairly confident Matteo Guendouzi will not be joining them.

He was called up for the France squad for the first time last week which means he had to sing for his teammates as part of the initiation process.

READ MORE: “I expect them to do better than last year”- Arsenal backed to improve by former captain

His performance is well received but it looks like teammates are more laughing at him rather than with him:

France play Andorra and Albania in this round of international fixtures and it will be interesting to see if he gets his first cap or not.