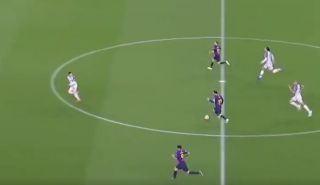 Liverpool and Holland star Virgil Van Dijk has been announced as the Champions League’s fastest player for the 2018/19 season following a back-tracking run vs Barcelona.

The Reds won their sixth European Cup last season, with Van Dijk playing a major role in this, as Klopp’s side swept away all before them as they won their first major trophy under the German.

According to UEFA, Virgil van Dijk clocked the fastest sprint in the Champions League last season…

And following last year’s CL campaign, UEFA have confirmed Van Dijk as the competition’s fastest player for this sprint he made against Barcelona back at the start of May.

We knew the Dutchman was fast, but we didn’t realise he was the fastest in Europe!