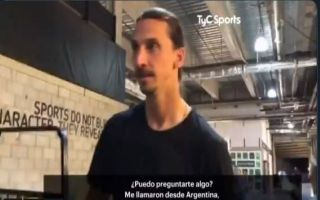 Of course Zlatan Ibrahimovic is a magnificent player, but he’s also turned himself into a brand with his sulky demeanor and brutal way of dealing with some fans. His latest response to a weird question from a fan was caught on video.

Admittedly Danielle De Rossi signing for Boca Juniors was a really interesting story this Summer, but why would you ask Zlatan what he thought about it? He has no real connection to the Italian, Boca Juniors or Roma so his opinion isn’t really relevant.

Zlatan Ibrahimovic was signing autographs for fans after the LA Galaxy game and a reporter came through to ask him what he thinks about the signing of De Rossi to Boca Juniors.

You get the impression that the American fan has tried to impress Zlatan by displaying knowledge of a different player and league, but the Swede was having none of it.