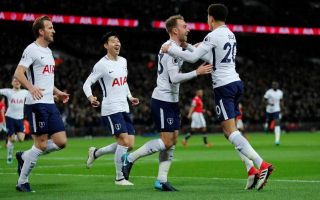 The Danish international has entered the final year of his Spurs contract and is yet to sign a new one with the Daily Mail claiming that he rejected a £200000-a-week deal offered by the club. Eriksen was linked to Real Madrid and Manchester United with Don Balon claiming that the former agreed to pay €84 million for his signature.

The Red Devils are still linked to the Tottenham attacking midfielder with the Sun claiming that they will make a move for him in January. Serie A giants Inter Milan are also interested in trying to sign Eriksen in January according to Express.

SEE MORE: Tottenham set to go back in for Championship star after having £3M transfer offer rejected in summer

Now, Atletico Madrid have also entered the race to sign the Danish international according to AS who also claim that Juventus and PSG are also interested in him.

Eriksen has established himself as one of the best attacking midfielders in the world through his performances for Spurs and there’s no doubt that many teams will be interested in signing him. However, Spurs would certainly prefer to have him for a while or sell him in January rather than in June when he’ll be available for nothing.

The Danish international has featured in all of Tottenham’s matches, scoring against Arsenal last weekend. He’s currently away on international duty and will feature for Denmark in their Euro qualifiers against Gibraltar and Georgia.

“We didn’t have that in the past” – Pundit explains the secret to Southgate’s success, names the Chelsea star who’s undroppable for England + the Euro 2020 star who’d be a good signing for Man Utd
More Stories Christian Eriksen