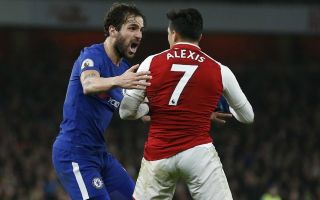 Former Arsenal and Barcelona star Cesc Fabregas said that he received offers from Real Madrid but preferred to stay in North London.

The Spaniard joined Arsenal’s youth team back in 2003 and soon became a regular under Arsene Wenger. Fabregas made a total of 306 appearances for the Gunners, scoring 59 goals and providing 92 assists.

MORE: Arsenal loanee talks about future at the Emirates

However, the Monaco midfielder could’ve also played for Real Madrid when the club approached him but didn’t do so. As quoted by Goal, Fabregas told AS: “They called me more than once or twice. The first time I was very young. I was 18 and they offered me a big salary, but I felt like I belonged at Arsenal.

“(Arsene) Wenger had bet the farm on me. I couldn’t leave. In any case, I’ll always be grateful to Madrid for the way they treated me. When I was 23 I had a serious calf injury and they sent me a really nice message. I’m grateful for their interest in me but I always dreamed of playing for Barca.”

Fabregas eventually joined the Blaugrana in 2011 and spent three seasons with them, scoring 42 goals and providing 51 assists in 151 appearances across all competitions. He later joined Chelsea and played 198 matches for them before signing for current club Monaco.

The 32-year-old was sent off in Les Monegasques’ Ligue 1 opener against Lyon and is yet to feature in a match for them. He’ll hope to feature in Monaco’s next match which is against Marseille at the Stade Louis II on the 15th.