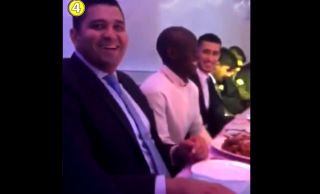 This Liverpool fan tried his luck to lure Chelsea midfielder N’Golo Kante to Anfield as the France international made an appearance at a wedding.

Watch Kante’s reaction below as he breaks out into a big smile but shakes his head at the offer, showing himself to be a class act who’s comfortable being out in the real world with fans.

MORE: Van Dijk says what Liverpool will have to do in order to improve

N’Golo Kante surprised a fan by attending his daughter's wedding as a surprise guest.

This Liverpool fan on the table cheekily asked him to join the Reds.

Just look at Kante's reaction. Such a likeable guy. ?pic.twitter.com/lwK6pm8DJp

Kante has long shown himself to be a great character as well as a world class footballer, and one can imagine he’d also be a great fit at Liverpool.

That perhaps seems unlikely, however, with the former Leicester City man one of Chelsea’s most important players and not one they could afford to lose to a rival right now.