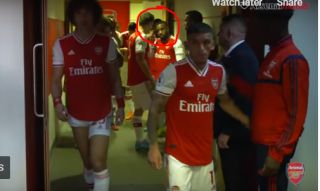 Arsenal striker Alexandre Lacazette appeared to give Sokratis Papastathopoulos something of a pep talk ahead of the second half of the recent 2-2 draw against Tottenham.

The Gunners fought back from 2-0 down to take a point from the North London Derby clash at the Emirates Stadium, with the defence certainly not convincing enough in that opening period.

Lacazette’s goal just before half time gave Arsenal hope, and it’s clear the Frenchman is also a vocal presence off the pitch.

Watch the video above from around 10.39 as Lacazette clearly seems to be selling Sokratis to keep his head or keep focused as they repeatedly chat before taking to the pitch for the second half.