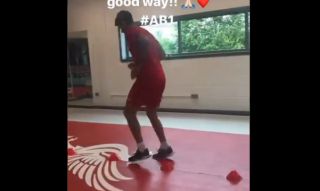 Liverpool goalkeeper Alisson looks in decent shape as he works his way back from an injury suffered on the opening day of the season.

The Brazil international was a star performer for the Reds as they won the Champions League last season, and has been a big miss this term, even if backup ‘keeper Adrian has done a decent enough job in his place.

Liverpool fans will be eager to see Alisson back as soon as possible, and this video above suggests he’s on the mend as he goes through some light training.

It is probably still some time before the 26-year-old can actually play competitive games again, but at least LFC fans can start to look forward to his journey back into Jurgen Klopp’s side.