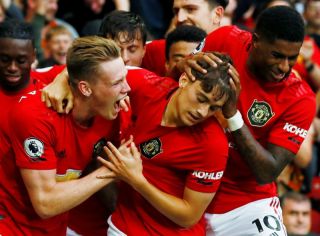 After finishing a disappointing 6th in the Premier League last season, the Red Devils brought in some reinforcements this summer. They signed the likes of Daniel James, Aaron Wan-Bissaka and Harry Maguire.

James has been terrific for Ole Gunnar Sollskjaer so far, scoring three goals already. Wan-Bissaka has also done really well at right-back while Maguire seems to be a much better option in central defence compared to the likes of Phil Jones and Eric Bailly.

Irwin particularly praised James and Wan-Bissaka for how they’ve fared so far. Speaking to Manchester United’s official website, the Irishman said about the latter: “I saw him play for Palace quite a bit last year, and he only played for the Palace first team for 15 months. He spent [his younger] years as a right winger, so what surprises me is how good he is defensively. Not just the tackling, because we saw that last year and in the first four games of this season, but the positions he takes up are very good.

“You always worry about a winger when they transform into a full-back, it can take them a while to get used to that. He seems really good at that. Obviously he’s a young lad and has a lot to learn yet, but he’s been a real plus. Last year we conceded 54 goals in 38 games. That’s not really Manchester United, we’ve always been good defensively. We need to strengthen, which we have done, and we need to keep more clean sheets.”

About James, Irwin said: “He’s a player that can play on both wings and can cut in on his left and right. I think we’ve seen that already.  “He’s not afraid to run at players with his pace and you always want players like that to chip in with goals, but to score three in four is a really great start for him. Some of the balls he puts in, particular in the latter stages against Southampton last Saturday, were a joy to watch. He’s been brilliant.”

Both James and Wan-Bissaka have done well so far but Manchester United’s start hasn’t been the kind that befits a club of their stature. The Red Devils are currently 8th in the Premier League table after winning just one of their first four matches. After the international break, Manchester United play Leicester City.