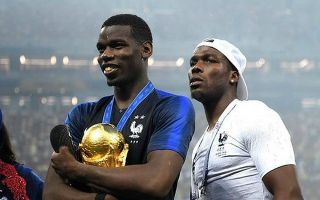 Mathias Pogba, the brother of Manchester United midfielder Paul Pogba, has majorly insulted the club by stating David de Gea is their only other top player.

This is unlikely to go down well with Red Devils fans, especially as Pogba continues to talk up a potential transfer for his brother away from Old Trafford.

The France international was linked with Real Madrid and Juventus over the summer, though a move failed to materialise for him.

Mathias has now spoken about the situation, and slipped in his dig at Man Utd over their number of top players.

“Paul knows that he cannot leave Manchester United so he’s going to focus on this season,” he told El Chiringuito.

“It’s not easy right now, because he has a lot of responsibility in the team.

“A lot of big players have left. The only great player is De Gea, the goalkeeper, which means he’s going to have to put a lot of effort in every game.”